A recent review of THE TAILOR’S NEEDLE 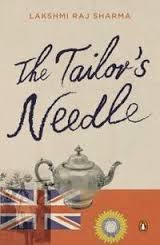 Prof. Lakshmi Raj Sharma’s The Tailor’s Needle has been on my reading list for a while now. Recommended by many, The Tailor’s Needle had a smell and feel of a grand novel and I couldn’t bring myself to read it in bits and bytes as I normally do with most books. As a result, the enjoyment was delayed by a fair extent. Nevertheless, when I got around to it, I was not disappointed.

What would be the result if an Indian author with excellent command over English writes a book which is the Indian equivalent of a masterpiece such as Doctor Zhivago or War and Peace, but has a heroine who could be, in a different era and geography, Austen’s Elizabeth Bennett? Throw in a bit of Agatha Christie and you would have The Tailor’s Needle which is set in the early part of the 20th century when the British were still entrenched in India and the freedom struggle was slowly gaining momentum. A time of great changes and hopes as well as a period when traditional values were starting to be questioned.

When the novel begins, one meets Cambridge-educated Sir Saraswati Chandra Ranbakshi who is the Prime Minister of the princely state of Kashinagar. Sir Saraswati has three children – Yogendra who aspires to be like his father, temperamental Maneka, our own desi Elizabeth Bennett and Sita, as humble and meek as Indian women as stereotyped to be. Lord Mortimer Edmund Griffin-Tiffin, the Viceroy of India, would like to annex Kashinagar under one pretext or the other and Sir Saraswati takes it on himself to keep the wolf from the door. After the death of the Maharaja of Kashinagar, Sir Saraswati moves to Mizapur with his family. Interestingly Wikipedia tells me that Prof. Sharma too hails from Mirzapur.

A tailor’s needle does not discriminate between garments. Sir Saraswati aspires to be akin to a tailor’s needle, one who treats all people alike, be they Maharaja or mendicant, Englishman or low caste Indian. If this gives the impression that Sir Saraswati is a benign see-no-evil, hear-no-evil, tell-no-evil sort of being, you couldn’t be more off the mark. When a friend is in danger of being attacked by dacoits, Sir Saraswati organises a defence in a manner which any general would have been proud of. Yogendra too follows his father’s footsteps, in terms of values and principles.

Maneka on the other hand is a far cry from these two fine gentlemen. I found Maneka to be the most interesting and even likeable character of the lot, despite her temper tantrums. Maneka’s story is worthy of a separate novel, with so many twists and turns and crests and troughs. Maneka’s affair with an Englishman leads to her pregnancy before marriage, which in turns forces her to go for a dangerous and surreptitious abortion. A normal woman would have crumbled as a result of all that, but not Maneka. Literally handpicking her own husband who turns out to be an exceptional prince with a history, Maneka has a never-say-die attitude which makes her a woman far ahead of her time. Sita on the other hand is an excellent example of how two children of the same gender from the same womb can be so different. I will not give away any more of the story and spoil it for other readers, but only disclose that the man who Sita happily agrees to marry could have been one of the princes described in Freedom at Midnight by Lapierre and Collins.

One doesn’t expect a murder mystery to be tucked inside a novel likeThe Tailor’s Needle. I was therefore doubly surprised when I found not one, but two (related) murders in the course of this novel. Maneka is deeply involved in the murders and her father and brother take on the role of detectives to solve them both. Prof. Sharma’s style of writing so good that one doesn’t notice the transition from War and Peace toPride and Prejudice to an Agatha Christie crime novel.

Yogendra falls in love with a pretty girl from a good family who is from a different (lower) caste. The universe seems to conspire against the loving couple and Yogendra and Gauri lose all hope. Does Prof. Sharma play cupid or does he go with the values of those times? Remember those were times when even Gandhi-ji was slow to support inter-caste marriages!

One of the best bits about The Tailor’s Needle is how it shows the values and mores of those times in a realistic way. British officials ranging from the Viceroy to District Collectors are not too honest or morally upright, though they take pains to appear so. Such efforts have given them a clean chit for posterity, but Prof. Sharma does not hesitate to call a spade a spade. Sir Saraswati is in awe of the British and their values, even as he fights to prevent them from annexing Kashinagar. Towards the end, as India’s freedom struggle grows stronger, Sir Saraswati is better able to reconcile his natural Indian values and his admiration for the British.

Lakshmi Raj Sharma is a Professsor of English at the University of Allahabad.

On the whole, The Tailor’s Needle turned out to be a splendid novel and an excellent read.

WINNOWED
I am a professional who works the usual long hours. Writing is a hobby I indulge in when I get some spare time. My first novel Hitchhiker was published by Books for Change in December 2005. My second novel When the Snow Melts was published by Amaryllis in 2012. I like to read political writings and fiction with a historical background or which revolves around political issues. The views reflected in this blog are my personal views and are in no way connected to my profession or my employer.

My novel, “When The Snow Melts“, a spy thriller, published by Amaryllis in September 2012, can be purchased online from Infibeam, Flipkart,Landmark, Sapna, Crossword,Manjul, Foyles Waterstones andAmazon. It is also available at many book stores such as Landmark.

My first novel Hitchhiker was published in December 2005 byBooks for Change. It’s available onFlipkart and Infibeam